Beta Mod is a modification by Rise To Honor, DeadPoolXYZ, c00ld0c26 and Walter20210.

Beta Mod restores the original concepts and ideas that RockstarGames had planned for Bully before the official release. Such as character designs and other removed/scrapped features that were originally planned.

The mod was released firstly as a character skin mod, and later improved into a bigger project, a new and big update is being worked on according to his creator, including : New models, textures and some other minor modifications.

The mod is currently either delayed or cancelled, as the only member of the project who is still modding actively is DeadPoolXYZ. 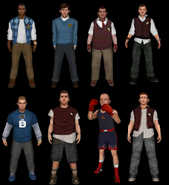 Add a photo to this gallery

Retrieved from "https://bully-mods.fandom.com/wiki/Bully_Beta_Mod?oldid=4396"
Community content is available under CC-BY-SA unless otherwise noted.